Yesterday (Saturday 27th June) a few of us went to a screening of ‘Genocide Recordings’, part of the 5th Annual Rwanda Film Festival (12-28th June) that has been taking place the last couple of weeks. We got to the venue an hour early, or rather the programme started an hour late....

Several short films were shown. ‘Massacre at Murambi’, by Sam Kauffmann. Murambi is the site of a newly built secondary school where one of the world’s most horrifying mass murders took place. Over 50,000 Tutsi were urged by the Rwanda authorities to flee to the school for their safety from the murderous Hutu militia. But it was a trap; nearly all of them were slaughtered. ‘Flowers of Rwanda’ by David Munoz, a reflection from survivors looking at the situation in Rwanda now and a discussion about the role of educational films in moving forward from genocide. The work of British television journalist, Nick Hughes, was the most stark and haunting. He shot the only known media footage of killings taking place during the genocide. 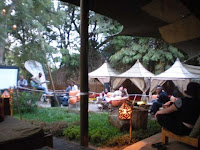 Hughes film documents his return to Rwanda 14 years after the genocide to try and find out who had been killed and who had done the killing in the horrifying few minutes he captured on film in 1994. He interviewed people from the area where the killing had taken place, showed them his footage and pieced together the events, locating survivors and those who had helped people to survive. A Gacaca court hearing was arranged on the strength of this evidence and perpetrators who had been identified in the footage by the community were invited to admit their crimes. All denied the crimes.

The following extract about Gacaca courts is the UNIFEM website: United Nations Development Fund for Women,

‘Gacaca, Rwanda's traditional, community-based conflict resolution system, was used historically to adjudicate local property crimes and civil disputes. In the aftermath of the 1994 genocide, the Rwandan government revived and revised this indigenous mechanism to assign jurisdiction over some genocide crimes……

As the majority of survivors and witnesses, women's participation has been an important element of the Gacaca system. For example, although in the past women were not permitted to serve as Gacaca judges, the government has required that at least 30 per cent of the judges be female. According to one scholar, "The community basis of Gacaca allows women to participate on various levels, recognizes their role in the reconciliation process, and gives them an identity beyond that of victims."

It was a difficult experience to watch this screening of people being slaughtered and to see onlookers at the scene jigging about, dancing. But it was also compelling to see survivors, although devastated by the recording, driven to watch the footage again and again, craning their heads toward the small computer, searching the screen and their minds for the identity of the perpetrators, knowing they now lived among them.

There was also a short documentary about the 1dollarcampaign, which is a project to raise funds to build houses, homes, for genocide orphans who stay at school during school holidays because they have not family and nowhere else to go.

In between films there were talks exploring possibilities for recovery and reconciliation and song performances evoking forgiveness and unity, hoping to salve the trauma of this national tragedy.

Today I went with my housemates, Hanna, Jammie and Noam, to two genocide memorial sites. It was so good to get out of the city. Good to see the endless, lush and beautifully rolling hills of Rwanda but gut wrenching to contemplate the remnants of mass murder and a struggle to grapple mentally and emotionally with the extent and horror of the genocide crimes.

We went first to the church at Nyamata, 30km from Kigali. 10,000 people were massacred in this church and 40,000 in the surrounding areas. The church was administered by European Clergy who were killed once it was discovered they were protecting Tutsis. People had sought refuge in this church because during the 1959 ousting of Tutsis, those who sought safety there had been spared.

The site, lovingly maintained, is decked with purple and white bunting and bouquets of flowers. Purple is the colour of death in Rwanda. I entered the church slowly, halted after just a few steps by scene the before me, my diaphragm and throat tightened against the rising tide of emotions. I saw mounds and mounds of dirty, dusty remnants of clothing piled up on wooden benches, blood stained walls, shrapnel holes in the blood-splattered ceiling and instruments of death on the altar. I recalled the work of Christian Boltanski, a Paris based installation artist whose work wrestles with death, memory and loss. I sat down for a while to get a hold of myself

before moving slowly through the space, full of sorrow for the people who had been murdered - suffering brutal and merciless death.

We were told by our guide and Banner, our very well informed taxi driver, that clothes and bones were gathered from outside the church and the surrounding area and bodies were still being discovered to this day; pregnant women were held down on the altar, babies violently ripped from their bodes and we were shown a blood stained patch where a baby had been bashed to death against the wall. It was impossible to take it all in. Shocked and enraged I started to take photographs, forcing myself to witness this aftermath, present to the experience of my whole body in revolt against what I was seeing and had been told.

Outside in the courtyard two underground caverns have been dug to house countless bones and coffins, each containing the bones of 10 or more people. Walking along the short, very narrow, claustrophobic corridor, surrounded on either side by stacked coffins and shelves upon shelves of bones and skulls, some of which were cracked from the powerful blow of a machete, again brought the enormity of the crimes home. Feeling a bit nauseous, it was a relief to ge

t back out in the open and feel- very aware of my alive body - fresh air in my lungs and warm bright sunlight ton my skin. The purple and white bunting blowing in the cool breeze, the pale blue sky, and brightly coloured flowers and the blue-green hills in the distance all quietly comforting, helping me to regain a sense of cohesion.

We drove on to Ntarama church, just a few kilometers away from Nyamata on the road back to Kigali. This genocide site has been left as it was after the bodies were removed. Again remnants of clothes were hung on the walls and also the rafters of the church. There were shelves of skulls (some very small), bones, piles of personal belongings and weapons. 5,000 were slaughtered at this site, mostly women and children. Behind the church were two small buildings where people had also been killed. One building was a Sunday school for the children the other a kitchen. Nearby there was a wall of names of the deceased, a work in progress.

We all stood and walked around drying our eyes, taking in the devastation, feeling countless emotions and speechless. Then, dry-eyed, we signed the visitors’ book, left our donations and instinctively sought contact with the children who had gathered outside to watch the group of Muzungus. Amakuru? Amakuru? How are you? We called out. After a moment’s hesitation, their chorus response, Nymesa! Fine! brought a smile to all our faces, lifting our spirits as we got into the car to go.


We drove back in silence and stopped at Gahaya Links, a basket making business started by two Rwandans sisters, employing over 4,000 rural women, many widows from the Genocide. A few women were sitting together outside the main warehouse talking, one feeding her child, about to start making baskets. Inside, the splendour of their handiwork in countless colours and designs of traditionally woven baskets, bowls and mats. I received this sight as a celebration of traditional Rwandan handicraft skills and a testament to the enduring strength, survival spirit and sustained recovery among women in Rwanda.