Day of the African Child

It’s Sunday and I have an extra day off, resting, reading and relishing the extra time on my hands. 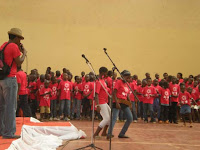 Last Tuesday was ‘Day of the African Child’, an annual event which commemorates South African children who lost their lives protesting against poor education….

“In Soweto, South Africa, thousands of black school children took to the streets in 1976, in a march more than half a mile long, to protest the inferior quality of their education and to demand their right to be taught in their own language. Hundreds of young boys and girls were shot down; and in the two weeks of protest that followed, more than a hundred people were killed and more than a thousand were injured. To honour the memory of those killed and the courage of all those who marched, the Day of the African Child has been celebrated on 16 June every year since 1991, when it was first initiated by the Organization of African Unity. The Day also draws attention to the lives of African children today. This year's theme is the need to ensure all children are registered at birth.” UNICEF

Four years ago We-Actx chose this as the day on which to celebrate the good health, future possibilities, hopes and dreams of all the children in the We-Actx programme, linking the importance of their lives to the wider history of Africa. 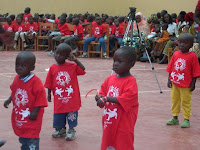 All age groups, from the 4-5 year olds to the 18-20 year old young adults, worked hard for weeks preparing for the day’s celebrations. Watched by proud parents, invited guests, local government representatives and We-Actx executive, many of them displayed their diverse talents during the half day programme of music and dance performances, poetry and comedy sketches. There were speeches from the We-Actx programme directors, the giving of prizes by to those who had excelled and also a few choice words from the United Sates Ambassador to Rwanda - including a smattering of Kinyarwanda, which had everyone raising their eyebrows, impressed. 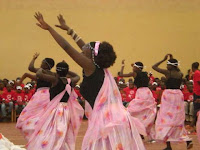 The ambassador described the children as the ’lights of Rwanda’, and asked them all to look into each other’s eyes. “Can you see the light in the eyes of the person sitting next to you?” The children ogled each other. Some smiling brightly while others had fun pulling faces; some pensive while others were confused as to what was being asked of them. He then turned to the parents and asked, ‘Do you see the light in the eyes of your children? That light is the light and hope of Rwanda: the light from the future stars of your country.” I wasn’t sure how to interpret this. It reminded me of drama exercises I used to do while doing theatre studies in Amsterdam and creative personal development workshops I did in London soon after the shock of losing one of my beloved sisters. 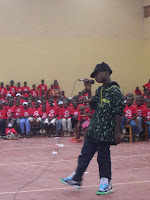 On the one hand I felt slightly embarrassed. It was so American, so cheesy. On the other, here was a very simple technique employed to bypass the critical mind and connect to the deeper place of hope and inspiration that is a perpetual source of creativity and love in us all. This is the light that shines so brightly in children unless it is dimmed and marred by the harsh consequences of social unrest, war or, in the case of Rwanda, Genocide. Poverty, HIV infection and the attendant maladies of ill health, mal nutrition, social stigma, lack of education, the trauma of genocide and genocide rape together with that of sexual abuse etc. all combine in different ways to impede the lives of the children and families all We-Actx staff and volunteers serve. There was something very special and necessary about this day of celebration that reminded everyone just how precious each and every one of the 600 odd children present that day really is and that in the wake of so much devastation, hope lives on in the lives and dreams of all Rwanda’s children. 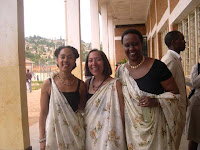 Speeches were followed by a slap up Rwandan lunch of rice, spinach, bean stew and or meat stew, baked potatoes, macaroni cheese and a bottle of Fanta. The children were served first and, as a few of the volunteers queued up to get food for the children, I noticed several Rwandan guests or perhaps journalists taking the opportunity to photograph ‘mzungus’ (white or rich people) serving food. It was good to meet and mingle with more of the We-Actx staff and to see many of the women I teach out in their Sunday best. Happy, proud and enjoying a little respite from the hardship of their daily lives to celebrate the good health and future hopes for their bright and beautiful children. The event made the front page of a local paper, hailed as a success all round.

Numbers in some of the groups seemed to be a little low and after a little investigation through the group counselors, we discovered that many of the women are tired: they walk a long way in the heat of the dry season to get to the class, or they have been working for hours before the class. They are hungry and thirsty and don’t have money for food and yoga is relatively or completely new to some. Speaking with Deirdre, who was instrumental in setting up the We-Actxyoga project over a year ago and overseas all the teaching, we are beginning to understand that the yoga we offer is not just a way to exercise and relax body and mind but also an opportunity to have some fun, feel happy, elevate serotonin levels and feel loved. 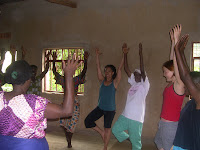 As a result, Hanna (my co-teacher) and I have loosened our teaching approach considerably. Astanga yoga follows a set sequence that is repeated each time one does the yoga practice. This is both a benefit and a possible drawback. On the plus side, once the sequence is learned, one has a very well designed yoga sequence for life. The down side is that the practice can lack creativity and become a bit too serious if followed to the letter blindly. Although heavily modified, the yoga we’ve been teaching the various groups has followed the Astanga primary series sequence fairly faithfully. Letting go of adherence to the set primary sequence even further has brought change, liberating creativity and freeing us up to be more playful and spontaneous. 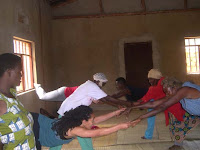 Yoga classes taught after the emergence of this new understanding last week were much more fun. There are fewer struggles with the language, the adjustments and the pace and more connection to joy. Rearranging the sequence a little, including in a variety of balance poses, being led by spontaneous movements women made and weaving them into asana (yoga poses), things began to flow more freely. These small changes have upped the entertainment factor in our classes, making way for more laughter, more energy, more sweat and more of the “happy” hormone, serotonin. Serotonin occurs naturally in the brain and greatly influences an overall sense of well-being. Stimulated by exercise, laughter happiness it helps to regulate moods, temper anxiety, and relieve depression. It is also credited with being a natural sleep aid. All of which will go a long way to bringing health happiness and healing the women who come to class.

The notion of yoga as performance or entertainment might seem contrary to some but its ability to unlock, release and stimulate healing in the body-mind complex is now undisputed. I feel as if I’ve turned a corner and got my yoga teaching groove back! 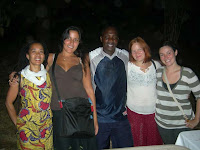 Its now the early hours of Tuesday morning and im still buzzing from the best an most sociable weekend yet in Rwanda. This included a delicious brunch overlooking a spectacular view of Kigali with a few members of the yoga group I teach at the American Embassy; a few films shown as part of the 5th Rwandan Film Festival and a twilight hour leaving party which offered all who went from the house their first dance in Rwanda. The band played butt shaking Congolese style music that, in spite of the sporadic problems with the mic and speakers, kept us going after other guests had gone. The waiting staff and musicians and our selves the last limber occupiers of that starlit, green dance floor.
Posted by Georgina at 02:56